If a prospect smells BS coming from a rep during a demo or sales presentation, the deal’s already dead. Every buyer has an internal BS radar. The bigger the ACV, the more fine-tuned their radar. The second it’s triggered, the chances of closing the sale are obliterated.

If your team is puffing out their chests and selling in a way that isn’t true to themselves, prospects are going to spot their routine and shut down. To connect with buyers, salespeople need to develop their own unique selling style that’s true to themselves. We’ve all listened to a new account executive struggle through a sales presentation. It’s awkward for everyone involved. On the flip side, when you hear someone speak authentically, with conviction and authority, you want to trust them immediately. They may be pitching you, but it doesn’t feel like you are being sold.

Check out this presentation from Gary Vaynerchuk:

He’s fast talking, pulls no punches, jumps around from topic to topic — and is as authentic as can be. When you listen to him present, there’s no doubt that he’s the real deal. No veneer, no polish – just a person speaking his mind and educating you about what he believes. But… if that new AE on your team tried to talk to a prospect like that, would it work for them?

That AE would come off scatterbrained, pushy and over the top. Gary’s presentation style works for Gary because IT IS Gary. So why do sales reps do this? Why do they pretend to be something they’re not when they’re presenting to a potential buyer?

AEs are required to put themselves out there every day. Sometimes they’re able to win the sale, but more often than not they get rejected. It hurts to be told no. It’s hard to tell your manager that you’re way below quota and are not having any luck with your new leads. It’s humiliating to look up at the sales leaderboard and see your name at the bottom.

So instead of putting themselves out there to face the rejection head on, they create a sales persona to be their security blanket. You can hear it on calls: the fake voice, the over-confident tone, not listening to the prospect and reciting the script line for line. It may be easier to get rejected this way, but it won’t help your reps close any new business. To be successful, your account executives will need to be authentic when conducting sales presentations and communicating with prospects. 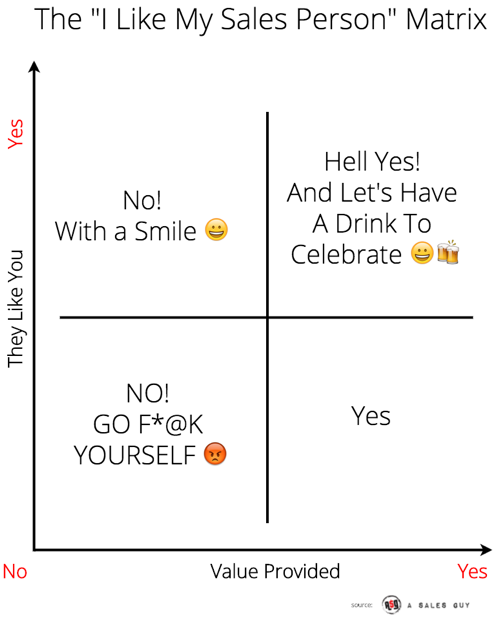 Reps spend too much time worrying about if the prospect likes them or not. It’s another security blanket for a fledgling AE. There’s no denying that when a prospect likes their rep that it makes the sales process easier. It also makes rejection a little more gentle. But a prospect liking a rep’s personality is not something your team can control and plan for.

It’s common to see a new rep fresh out of school join a company, get trained, and immediately start imitating the selling style of another successful rep in your org. It’s not that these fresh faces can’t learn from their peers, it’s that they learn the wrong things. They adopt another rep’s style instead of making the strategy and tactics their own. So how can they take a sales playbook and make it their own? By finding their own presentation style.

Some managers like to pair up new reps with more experienced reps for onboarding and training, but it can have some unintended and negative consequences. In his book, The Sales Acceleration Formula, Mark Roberge makes a strong case against ride-alongs during new rep training because it risks shoehorning one rep into another rep’s style. According to Mark, “Every top-performing salesperson succeeds in her own unique way. Heavy reliance on ride-alongs during the training process jeopardizes a new hire’s ability to shine using her unique strengths.” Two reps may have the same high overall productivity but they’ll achieve it in very different ways. One rep may be great at activity volume while another may be particularly strong with rapport-building. Training the rapport builder, (who needs precious time before calls to do her extra research) to ratchet up her volume will require her to change her selling style and compromise her productivity.

When doing one-on-one’s with your team go over each rep’s recorded calls with them. Listen for those times when they are themselves and really connect with the buyer. Encourage that behavior, recognize it and commend it. Being authentic may not always lead to a signed contract, but it will be the catalyst for honest conversations, quicker closes and fast disqualifications.

The same goes for when a rep starts putting on a show and loses buyer trust. When you hear it, call it out. When you both sense a complete disconnect between the rep and the buyer, pause the call recording and talk about it, get to the root of the issue and determine why it’s happening. It will be awkward and embarrassing at first, but it will help them correct course. Over time reps will look forward to this exercise. The best ones will come prepared, be able to call out when they went astray and work to improve every week.

A word of caution: there’s a lot that’s been written on presentation styles, and the 4 common presentation archetypes that most sellers fit into. Stay away from using these labels with your team. No one’s personality fits into a nice little box. People are unique, they are large, they contain multitudes – all the different styles and personalities on a sales floor can’t fit into four categories. What’s worse, if you’ve read your new hire wrong, you could be pigeonholing them into a style that doesn’t work for them and creating a self-fulfilling prophecy by labeling them. Instead of trying to force their hand to adopt a style, work with them to create their own based on their unique successes and failures from actual calls and presentations.

John-Henry Scherck is the owner of Growth Plays, a B2B content strategy and SEO consultancy based in Los Angeles. He works with founders, marketers, and investors to plan, build and refine growth marketing initiatives using a common sense approach. View all posts by jhtscherck

This site uses Akismet to reduce spam. Learn how your comment data is processed.